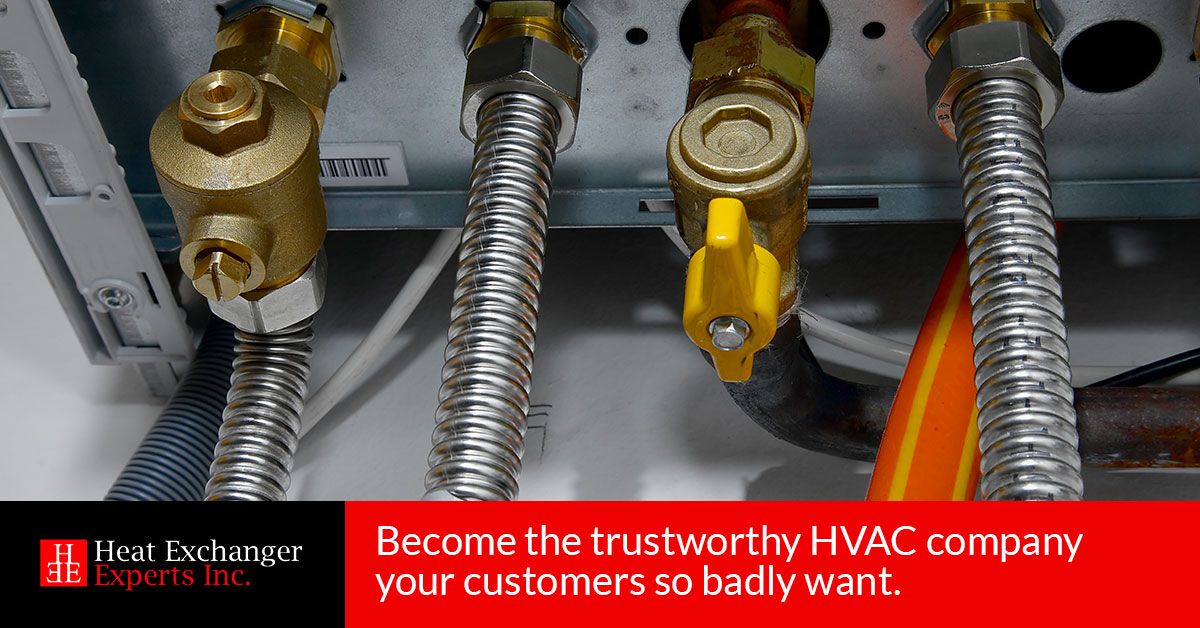 One of the major reasons that HVAC professionals across the country line up to attend a heat exchanger training course from our team is to better learn how to guide their clients toward a repair or replacement for their furnace. If you’re looking for the right tools and tactics to build up your HVAC techs as trustworthy experts, then read on for some helpful tips!

Navigating Repair and Replacement from the Sales Side

We’ve all been the homeowner on the other side of the sales situation, and it isn’t always a comfortable feeling. Most people have the impression in mind that their HVAC specialist will attempt to upsell them toward a new furnace or expensive repair regardless of its necessity, so it is your job to counteract that misconception and build a trusting relationship. After all, repeat business is hugely important in this industry, as general maintenance, not one time upsells, will account for the lion’s share of your cashflow.

One go-to sales staple is the classic “5,000 rule,” which gives homeowners and HVAC reps alike a tangible break-even point to point toward. Explain to the homeowner that they should take the proposed repair cost or estimate and multiply by the age of their furnace, if the number they receive is over 5,000, then it is usually worthwhile to replace the furnace, rather than repairing it. This helps to build confidence when the number is lower than 5,000 and a repair is recommended, but can sound a bit too convenient for your company when the opposite is true. All in all, we think this is helpful, but don’t recommend it as a hard-and-fast rule.

If you start talking about a replacement furnace, you’ll likely be looking at a set of glazed over eyes within a matter of moments. Remember, your customers are imagining a worst-case scenario that leaves them scraping by for the next few months out of the blue. If you can give them some reassurance on the spot by stating that there are currently certain promotions, rebates, and grants being put on by your company, the government, or even the local energy and gas company, then you can put much of those fears to rest, replacing them for hope of a cushioned fall down the rabbit hole of costs.

If the furnace in question is old, don’t be shy about telling the homeowner that. Even if a repair seems to be simple and easy, it may not be worth even finding out. If you tell a homeowner with an 18 year old furnace that they’re likely going to have to replace it in a few years, repaired or otherwise, and can actually save some money by upgrading to an energy efficient model that happens to feature numerous rebates, they may jump at the chance. Remember, cost is a huge concern, but paying to fix and re-fix the same old, dying furnace over and over isn’t something that many homeowners are going to want to do. This isn’t a chance to upsell them with a high-pressure sales pitch, but rather a chance to bring it to their attention; even if they plan to sell the home, any realtor and inspector will quickly indicate that the furnace is on its last leg, which will likely leave them indirectly paying for a new one anyways.

You simply cannot say whether a heat exchanger repair is necessary or not without heat exchanger training. This means that if any of your HVAC techs haven’t undergone this training, they’re shooting in the dark and likely replacing many good exchangers and failing to notice far more that are soon to fail. In either case, this can make your company look terrible if a functioning repair quickly opens up to a larger problem when the heat exchanger happens to give out a few months later; in instances like this, do you find it likely that the homeowner will trust your techs when they say the furnace needs to be replaced? No, of course not, they’ll be taking their business elsewhere instead.

Find out more about our heat exchanger training or request a session near you today!